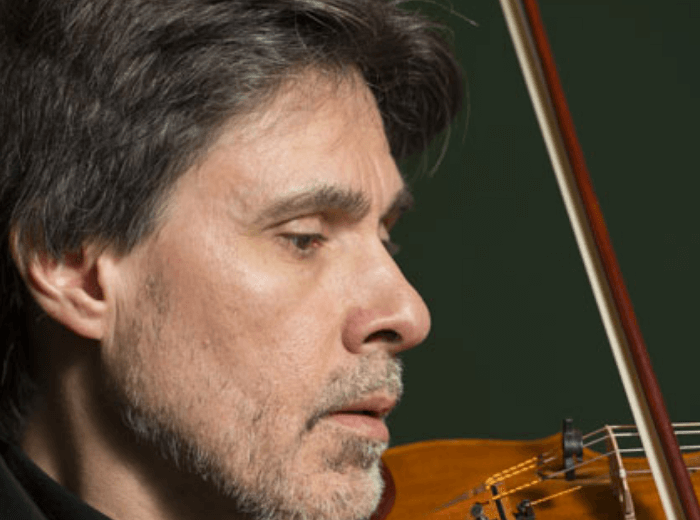 John Lowry has been Associate Concertmaster of the Calgary Philharmonic Orchestra since 1987. He was Concertmaster of the Edmonton Symphony for the 2002-2003 season, and has served as Guest Concertmaster of orchestras in Halifax, Winnipeg, Kitchener-Waterloo, Red Deer, and the Adelaide Symphony of South Australia.
He began his musical studies in Edmonton with Ranald Shean and went on to graduate from the University of Toronto and Yale University. His teachers have also included George Neikrug, David Zafer, and the eminent American virtuoso, Oscar Shumsky.

John has been a member of such musical organizations as the Opera Company of Boston, Esprit Contemporain, and the Canadian Opera Company, and was the founder of the Kensington Sinfonia in 1988. He was formerly Concertmaster of the New Hampshire Philharmonic and Opera New England, and has also performed with the Toronto Symphony, National Arts Centre Orchestra and National Ballet. He was previously on the faculty of the University of Manitoba and the University of Lowell, Massachusetts, and has also taught at the University of Calgary, Mount Royal College, and the Comox Valley Youth Music Centre. He has appeared as soloist with orchestras in Calgary, Edmonton, Toronto, Halifax, and Red Deer, with such conductors as Hans Graf, Mario Bernardi, James Judd, Jean-François Rivest, Timothy Vernon, and Ivars Taurins, and Pierre Hétu.

As a chamber musician, he has collaborated with such artists as James Campbell, Bernadene Blaha, Rivka Golani, Kevin Fitz-Gerald, Eliot Fisk, Robert Silverman, Angela Cheng, and Miriam Fried. He has participated in the Pacific Rim Festival, Alberta Scene 2005, and the Windy Mountain Music Project. He is a founding member of Calgary’s Land’s End Ensemble, specializing in 20th and 21st century music, which won the Western Canadian Music Award for Outstanding Classical Recording in 2005 and 2006. His violins were made by Christopher Sandvoss in 2005, and Carlo Ferdinando Landolfi in 1769.

Learn how you can support us through membership or donations.
Support US

Subscribe to our e-newsletter for the latest news and events!

In the spirit of reconciliation, we acknowledge that we live, work and play on the traditional territories of the Blackfoot Confederacy (Siksika, Kainai, Piikani), the Tsuut’ina, the Îyâxe Nakoda Nations, the Métis Nation (Region 3), and all people who make their homes in the Treaty 7 region of Southern Alberta.
© 2021 Land’s End Chamber Music Society of Calgary
Menu